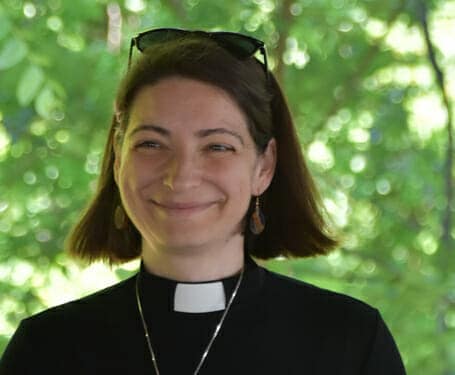 Viktória H. Parvin was born in Communist-controlled Hungary when Christianity was still strongly discouraged by the government. Her parents were not religious because it would have negatively affected their family’s access to employment and education. But her grandmother, who was a history teacher with a broader view of Hungary’s past, had witnessed the changes from German control to Russian control. Through it all, she held on to her Lutheran faith in secret and drew Viktória to an understanding and a faith in God. Viktória vividly remembers as a young girl secretly attending a Christmas Eve service with her grandmother. Though her father was not a man of faith, he left a New Testament out on his bookshelf where a teenage Viktória could find it. Strongly drawn to the church, she decided to be baptized and enroll in the seminary school.

Then when she was age 16, the world opened up to her, as she describes the experience of living through the fall of the Berlin Wall and the communist domination of Eastern Europe. She says it felt like a total shift in the flow of history, and suddenly new opportunities were everywhere. But after completing her theological studies in Hungary, she was disappointed to learn that her country offered few opportunities for women to actually serve as parish pastors.

This disappointment, however, led to a world of experiences that she never could have imagined. She decided to apply to study in the United States at The Lutheran School of Theology at Chicago. The next few years found her struggling to learn English and holding down two or three jobs at once, but thrilled with her studies. One course had her traveling to South Dakota to witness the spiritual practices of the Rosebud Sioux, including the sweat lodge ritual. An internship with the night ministry on the streets of Chicago included counseling the homeless, discussing HIV test results with young sex workers, and just offering an open heart and a hot cup of coffee to hopeless, suffering people. During the day she taught small children at the campus laboratory school which she considered a true delight.

After earning Master of Arts and Master of Divinity degrees at Chicago, she served a one-year internship with a congregation in Rome, New York, where she laughingly referred to herself as “the Vicar of Rome.” In that community she also served as chaplain at a nursing home, where her first day on the job was September 11, 2001. That day she found herself helping the very elderly residents–so fearful and confused by what they were watching on TV–try to make sense of what made no sense.

Viktória’s first full-time congregation was a shared ministry between two Lutheran churches in Vandalia and Loogootee in central Illinois. These two churches, although only a fifteen minute drive apart, had a somewhat antagonistic and suspicious relationship. Coming from different Lutheran traditions, they used different hymnals, had different services, and neither was eager to change. After nine years, when Viktória left to be married, she left two churches that had completely changed. The members say that Viktória helped them grow from antagonistic and suspicious to a loving, sharing Christian community.

Viktória moved to Virginia with her new husband, Landon Parvin, a freelance writer, working in the D.C. area. Their life in Virginia is more familiar to many of us since they joined St. Mark. Viktória served for eighteen months as interim pastor of Peace Lutheran Church in Charlottesville. She has also worked with the International Rescue Committee and participated in clinical pastoral education training at UVa.

Viktória says of the opportunity to be the pastor of St. Mark Lutheran, “I am so happy to be part of this faith community that reaches out to others, that sees its purpose in this community as serving those people who have not been included.” Our Reconciling in Christ commitment is very important to her, as is our commitment to reach out to refugees, and work together with other churches to serve those most in need in Charlottesville. She finds great joy in serving as our pastor.