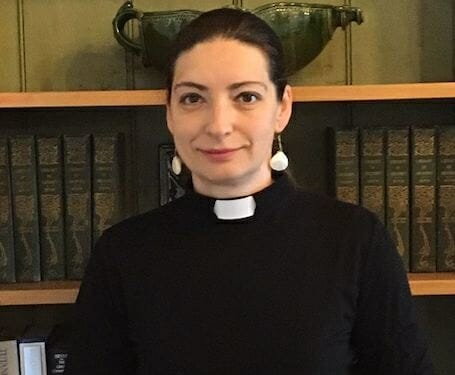 Pastor Viktória recently interviewed with WMRA, listen to the interview via the link below and see the full article:

An excerpt from the recent article in the Daily Progress about Pastor Viktória:

“When Viktória Halmagyi Parvin was 6 years old, her grandmother took her to a Christmas Eve midnight service in her hometown of Budapest, Hungary. It was the early ’80s and Christianity was highly discouraged by her country’s communist government.

“The sounds, the smells, the music, it was very special,” Parvin remembered in a recent interview. More importantly, she saw a significant change in people when they entered the church. Her countrymen, oftentimes somber, came alive with hope and cheer.

It didn’t take her long to realize a life in the clergy is what she wanted, perhaps against all odds. On Sunday, Parvin, 43, will be installed as the pastor of St. Mark Lutheran Church in Charlottesville. “I call this an unexpected blessing,” she said.

As a teenager, Parvin said, she knew her calling was to serve God. But, in a country that didn’t look favorably on Christianity, let alone a woman pastor, she was faced with a dilemma.

“I had to make the difficult choice to leave my country, perhaps never to return,” she said. “But I found my calling and I knew what I needed to do.”

In 1997, Parvin embarked on seminary school in Chicago, where she eventually completed her religious studies.

“I would describe my journey from Hungary to the present day as one of full of surprises,” said Parvin, who was the interim pastor at Peace Lutheran Church in Albemarle County for 18 months. “And my journey is also one about determination. Once you know your path in life, you need to do whatever it takes to make it happen.”

Parvin said that helping the members of her congregation find their spiritual calling is one of her most important tasks.

“As a pastor, I see myself as a facilitator. I’m lucky that my path and destiny were so clear to me, but that isn’t the case for everyone. Still, everyone has a calling, and as pastor, I’m here to help find it for everyone who wants to.”

Parvin said she believes she has a role in bringing people together.

That’s one of the reasons Parvin feels so connected to the Lutheran Church.

“We exclude no one and include everyone. We accept people with a different sexual orientation, different faiths or different cultures. That’s very important to me.”

Patty Marbury was the chairwoman of the church’s search committee tasked with finding a new pastor. According to Marbury, there are two reasons why Parvin was the perfect choice for St. Mark Lutheran Church.

“We were looking for a candidate to not only care for and nurture our congregation, but who’s also equipped to lead our mission outreach to the community. After speaking with Viktória, we soon learned she has those qualities,” she said.

Second, St. Mark’s is one of only two Lutheran churches in Virginia that have the “reconciling in Christ” status, according to Marbury. “That means that we not only accept people from the LGBT community, but we affirm them. We’re not in the business of trying to change them, but we accept them for who they are. In looking for a new pastor, we needed someone who wholeheartedly believed in that mission. Viktória Parvin fit that bill.”